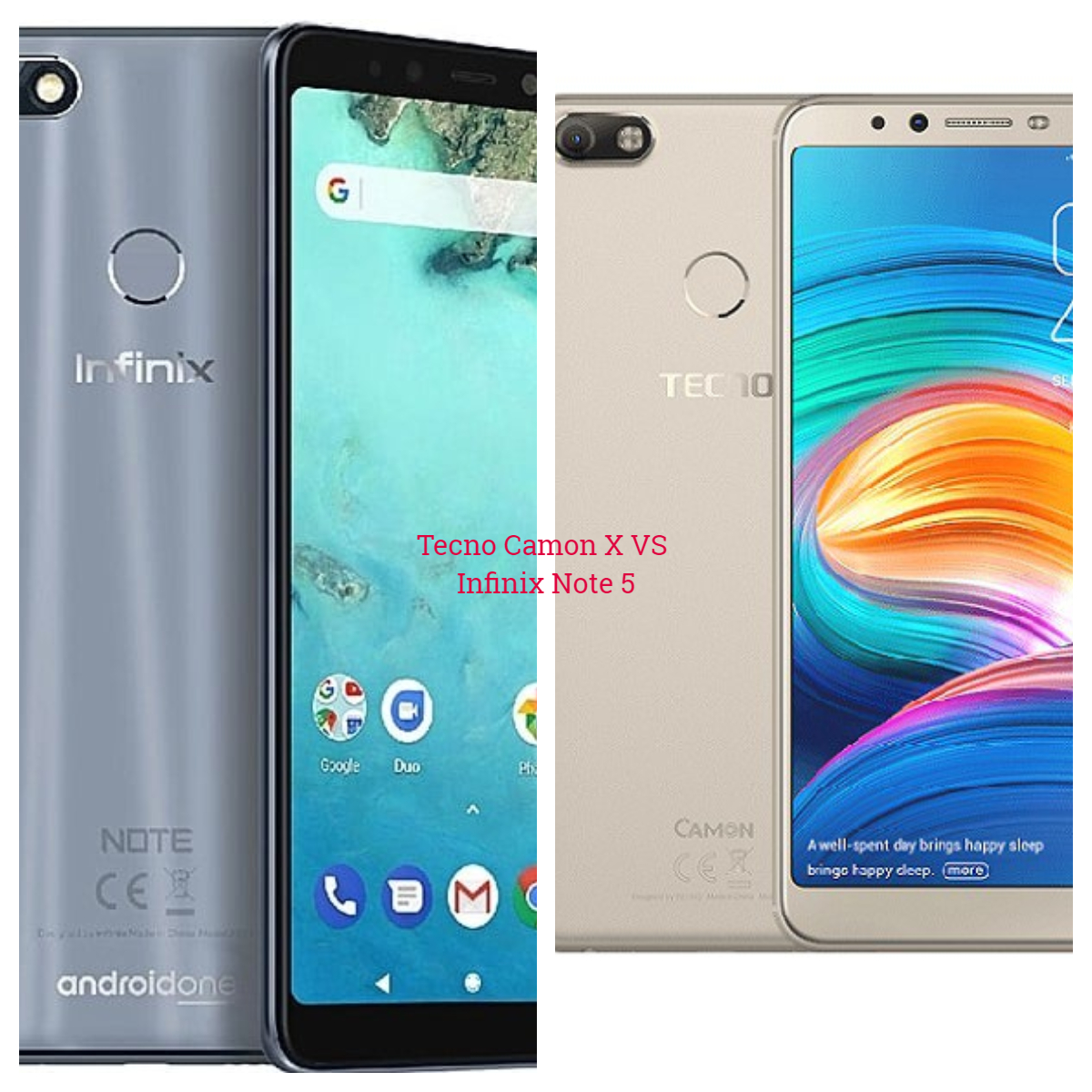 Infinix Note 5 VS Tecno Camon X. The full comparison is here. Read on…

TECNO and Infinix mobile are one of the most popular smartphones in Nigeria. These companies have a large presence in Nigeria market and her neighboring countries.

Each year they released beautiful smartphones to keep their fans busy and in the mid-year of this 2018 alone there are already two latest devices from both brands. One is TECNO Camon X  while the other is Infinix Note 5.

Well, they look good together that’s why we will be comparing the two phones to see their performance and to also know the real beast among them.

On the design, the two phones look beautiful, hey I’m not here to judge or choose a smartphone for you. But to be honest, the TECNO CAMON X packs a beautiful body design with a bezel-less display while the Infinix Note 5 still maintain a premium design that looks smooth and cute.

So, in this case, be the judge and tell which one will bring high-quality viewing experience to users since their screen size is the same.

On the color availability, they come in awesome colors too, only that the Infinix Note 5 has more color variant to choose from than the later.

Well, this does not mean that you will get a more sharp camera on the CAMON X than the Infinix Note 5 because both support high videos resolution.

Still, when shooting videos with the two phones, you will get a better video resolution on the Infinix Note 5 because it shoots up to 2160p@30fps while the TECNO CAMON X only record 1080p Video@30fps.

So In this area, we are good to conclude that both phones have a sharp camera just that the Infinix Note 5 will shoot higher video quality than the CAMON X.

On the storage, you will get either 16GB or 32GB of the CAMON X while the Infinix Note 5 has 32GB of inbuilt storage. You can also expand the storage up to 128GB via micro SD card.

On the hardware, the Infinix Note 5 will perform with Helio P23 chipset and an octa-core that clocked at 2.0GHz CPU while its rival. CAMON X has an Octa-core MediaTek MT6763T processor. You will get the same 3GB of RAM on both phones.

They are both powered by Android 8.1 Oreo operating system while the Infinix Note 5 has an Android One which is Google Android version. Meaning that the Infinix Note 5 users will be getting Google update from time to time. And you can also upgrade to Android P anytime and enjoy the great features it offers.

The overall performance of both devices will be fast and you will get the best treat when playing games.

You just have to make the decision yourself by comparing the features like the Android One which is an advantage over the TECNO CAMON X.

You will get both fingerprint scanner and face ID on the two phones except the AI features that is added on the Infinix Note 5 smartphone.

If you are looking for a smartphone to buy and you are still confused between the two phones, you can still check out the smartphones in this price segment. They are the Xiaomi Redmi S2, Xiaomi Redmi 6, Oppo Realme, and Leagoo S9.

List of Infinix Phones That Will Get Android 11 Updates

This website uses cookies to improve your experience while you navigate through the website. Out of these, the cookies that are categorized as necessary are stored on your browser as they are essential for the working of basic functionalities of the website. We also use third-party cookies that help us analyze and understand how you use this website. These cookies will be stored in your browser only with your consent. You also have the option to opt-out of these cookies. But opting out of some of these cookies may affect your browsing experience.
Necessary Always Enabled
Necessary cookies are absolutely essential for the website to function properly. This category only includes cookies that ensures basic functionalities and security features of the website. These cookies do not store any personal information.
Non-necessary
Any cookies that may not be particularly necessary for the website to function and is used specifically to collect user personal data via analytics, ads, other embedded contents are termed as non-necessary cookies. It is mandatory to procure user consent prior to running these cookies on your website.
SAVE & ACCEPT
MORE STORIES
Comparison

Compare Infinix Hot 7 VS Infinix Smart 3 Plus VS Infinix...