Homtom Zoji Z6 is a rugged looking smartphone for everyone needs. This device is willing to survive many drops and it also has those amazing features you’d expect on any android phone with an IP68 rating. 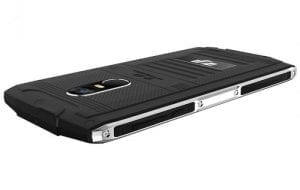 Where to buy Homtom zoji Z6.

The Homtom Zoji Z6 has everything that a businessman would need to runs its business safely. Starting from the IP68 rating which shows that the phone is both dust and water resistant to the body that is beautifully crafted with polycarbonate and metallic material thus improving its durability and roughness.

It features 4.7 inches with IPS display and resolution of 1280 x 720 pixels. The 312 ppi will ensure it bring out a real image and colors when viewing. You can buy the phone either in Orange, Green, Black colors. There is also a corning gorilla glass to protect the screen from scratches and cracks.

Coming to the camera expect the Homtom Zoji Z6 score average. It has a 5MP sensor on the backs for taking of photos which also support LED flash and for selfies you get 2MP front-facing cameras. Just as I made mention earlier this phone will be suitable for business people since they hardly have time for photos and videos calls.

The operating system is Android 6.0 Marshmallow with a RAM of 1GB. To enhance the performance, the Homtom Zoji Z6 boasts a Quad-core MediaTek MT6580T which chipset which runs at a speed of 1.3GHz with GPU of Mali-400 MP2 for smooth handling of games and other powerful apps.

The internal storage is 8GB expandable up to 64GB via micro SD card. The battery capacity is 3000 mAh that promise to last longer on a normal usage. The Homtom Zoji Z6 also offers a fingerprint scanner and 4G LTE support.