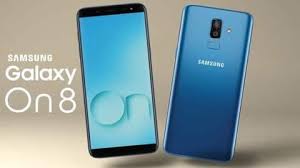 Samsung Galaxy On8 2018 is an affordable smartphone from Samsung mobile. This is an exclusive online version of the Galaxy J8 and it will be available in Black and Blue colors.

KEY FEATURES AND SPECS OF Samsung Galaxy On8.

Samsung Galaxy On8 2018 price in Nigeria See offer on Jumia

The Samsung Galaxy On8 is identical to the J8. This phone sport the design and it’s built with metal with dimensions of 75.7 mm x 159.19 mm x 8.19 mm and it weighs 191 grams. It has a display screen size of 6.0 inches HD+ with Super AMOLED capacitive touchscreen. The resolution is 1440 x 720 Pixels and 274 PPI density. The screen is protected by 2.5D Curved Glass and it reaches 76% screen to body ratio.

On the camera, the Samsung Galaxy On8 has a dual rear camera of 16 Megapixels + 5 Megapixels with an LED flash. The camera features FHD video recording and it shoots 1080p video resolution at 30 seconds per frame.

The selfie camera is 16 Megapixels with f/1.9 Aperture and LED Flash as well. On the storage, the Samsung Galaxy On8 has 64GB of inbuilt storage and you can also expand it up to 256GB using a micro SD card.

On the inside is a Qualcomm Snapdragon 450 Chipset with an Octa-Core 1.8GHz processor coupled with 4GB of RAM for smooth performance. Fueling the phone is a nonremovable battery capacity of 3500mAh that does not support fast charging technology. You will get Android 8.0 Oreo operating system with Experience 9.0 user interface.

Other features on the phone include a rear-mounted fingerprint scanner, micro USB with OTG and for connectivity, it has Wi-Fi 802.11 a/b/g/n, 802.11n 5GHz, Dual Band, Wi-Fi Direct, Wi-Fi Hotspot and 4G LTE network.

PRICE AND AVAILABILITY OF Samsung Galaxy On8.

General features of Samsung Galaxy On8

This website uses cookies to improve your experience while you navigate through the website. Out of these, the cookies that are categorized as necessary are stored on your browser as they are essential for the working of basic functionalities of the website. We also use third-party cookies that help us analyze and understand how you use this website. These cookies will be stored in your browser only with your consent. You also have the option to opt-out of these cookies. But opting out of some of these cookies may affect your browsing experience.
Necessary Always Enabled
Necessary cookies are absolutely essential for the website to function properly. This category only includes cookies that ensures basic functionalities and security features of the website. These cookies do not store any personal information.
Non-necessary
Any cookies that may not be particularly necessary for the website to function and is used specifically to collect user personal data via analytics, ads, other embedded contents are termed as non-necessary cookies. It is mandatory to procure user consent prior to running these cookies on your website.
SAVE & ACCEPT
MORE STORIES
News