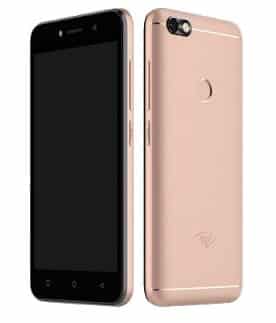 Earlier Itel was teasing their fans about the launch of a smartphone in the budget series that will boast of Android 8.1 Oreo Go Edition and a fingerprint scanner. Well, one of the smartphones is the Itel A32F.

This phone sport all the beauty of a budget phone in this category and it has the features you will like to have on a new phone. Far from this, the ITel A32F is quite affordable than you might think. So follow along as we unbox this good-looking smartphone in details.

Where to buy iTel A32F

On the design, the ITel A32F comes in a metallic body wrapped material that sports curved edges, smooth panel and a well-designed side bringing out a compatible body that will comfortably fit any palm. Taking another look on the phone panel, you will see a dual antenna positioned both on the top and bottom with the Itel logo sitting just above the bottom and the fingerprint sensor is on the right position where a finger can easily reach.

The camera is at the top left side lying horizontally with an LED flash beside it. Both the power button and the volume rocker is on the right side which means the left side will be left blank and shifting to the front area of the smartphone, the ITel A32F has lots of bezels on the bottom and the top with front snapper and the LED flash on them.

The standard screen size of 5.0 inches has a 16:9 aspect ratio with an IPS LCD capacitive touchscreen boasting a 640 x 480 pixels in resolution and 195 pixels per inch density. It also comes with a 2.5D curved glass which will be protecting the screen from damage.

The rear camera has 5MP lens with an LED flash and other regulars while the front area features 2MP with an LED flash as well. Though this snapper may look small, still on a bright background, users will get beautiful shots from them.

On the memory aspect, the Itel A32F comes with an inbuilt storage of 8GB which in this case may not be enough but thanks to the external SD card slot at least, users can extend the memory up to 32GB using a micro SD card.

The Android 8.1 Oreo Go Edition is what will be booting this phone along with a processor of MediaTek MT6737 and a quad-core that clocked at 1.3GHz speed with 28nm process technology offering fast performance. There is ARM Mali-T720 MP2 graphics processor that clocks at 650MHz with a 1GB of RAM which will give out good graphics and fast response when gaming or multitasking.

The battery provided on this is removable Li-Ion 2050mAh which will last long considering the specs of the phone. For connectivity, the Itel A32F has a 3G data support with a Bluetooth, WiFi hotspot and a micro USB cable from the box.

This website uses cookies to improve your experience while you navigate through the website. Out of these, the cookies that are categorized as necessary are stored on your browser as they are essential for the working of basic functionalities of the website. We also use third-party cookies that help us analyze and understand how you use this website. These cookies will be stored in your browser only with your consent. You also have the option to opt-out of these cookies. But opting out of some of these cookies may affect your browsing experience.
Necessary Always Enabled
Necessary cookies are absolutely essential for the website to function properly. This category only includes cookies that ensures basic functionalities and security features of the website. These cookies do not store any personal information.
Non-necessary
Any cookies that may not be particularly necessary for the website to function and is used specifically to collect user personal data via analytics, ads, other embedded contents are termed as non-necessary cookies. It is mandatory to procure user consent prior to running these cookies on your website.
SAVE & ACCEPT
MORE STORIES
Huawei