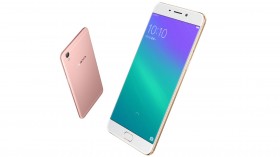 If you think having an 8MP   front-facing “selfie” camera is not enough, you might want to watch out for the OPPO A57.  It was just ANNOUNCED some days ago in its home country of China and it includes a 13MP front-facing camera so your selfies can get even more attractive.

The smartphone also has a 16MP rear-facing camera with an f/2.2 aperture and PDAF laser focus hardware. However, I must say that the other specifications  announced for the OPPO A57 are not very impressive. It has a 5.2-inch LCD display with a resolution of 720×1280. Inside, you will find a Qualcomm Snapdragon 435 octa-core processor with a clock speed of 1.4GHz.

There’s also 3GB of RAM and 32GB of inbuilt storage, with a microSD card slot for owners to add up to 128GB of additional storage. Finally, the phone comes with a 2900mAh battery inside with Android 6.0 Marshmallow installed and out of the box.

The OPPO A57 will officially go on sale in China on December 12 for ¥1,599, or about $231, with color options of Gold and Rose Gold. There’s no information yet   when the phone will be released outside of its native country.

Would you be interested in getting this phone for its selfie camera, even with its lower hardware specs?