Wiko View just as the name suggests is an engaging wide screen phone with 18:9 screen ration, a large 5.7 inches HD display, a fingerprint sensor and a back up of 16GB inbuilt storage plus the support of 4G LTE network.

Where to buy Wiko view

The Wiko view is just a perfect phone to watch films, read a text and play games with because of it immersive screen display that features 5.7 inches of IPS technology. The resolution of 1440 x 720 Pixels along with a density of 282ppi will bring out high and sharp images.

This multi-touch smartphone has a plastic body design but still parade an outstanding and balance looks that can easily trick anybody into believing that this is a premium device. The screen has a 2.5D curved glass to protect the phone and to increase its durability.

Just like the Wiko view XL, this wiko view also parades an impressive shooter of 13MP on the back that features large f/2.0 lens aperture and 5P lenses. Other features include LED flash, Geotagging, Face detection, HDR, Auto-focus among others. 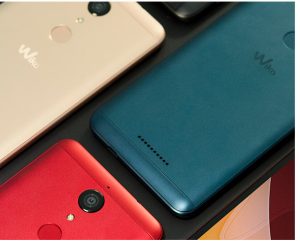 For selfies fanatics, the 16MP set up on this wiko view is something to talk about. With this front camera, you can snap beautiful selfies worth sharing on social media. You can also record 4k video quality with both cameras set up. The onboard storage is 16GB or 32GB expandable up to 128GB via MicroSD card.

The Wiko view has an operating system of Android 7.0 Nougat with a Qualcomm Snapdragon 425 MSM8917 chipset. The Quad-Core processor runs at 1.4GHz ARM Cortex-A53 with 3GB RAM.

There is a fingerprint scanner on the back with 4G LTE network and Wi-Fi for wireless connection. The wiko view is powered by a removable 2900mAh Li-poly with fast charging technology that lasts up to 29 hours of talk time on 2G standby mode.