Alcatel A7 XL is another cool looking smartphone that comes with a massive battery capacity and a sharp camera. 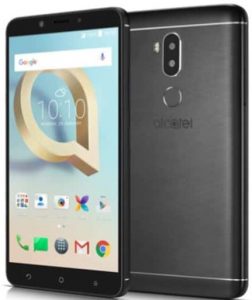 Key Features of Alcatel A7 XL.

Where to buy Alcatel A7 XL.

Coming with an aluminum body, the Alcatel A7 XL has 8.7 millimeters in thickness and weighs 175 in grams.

The larger 6.0-inch screen smartphone has LPTS IPS display with Asahi Dragontrail Glass at the top for protection against screen scratch and cracks.

The 5MP shooter on the front for selfies also has LED flash and full HD video recording capability.

The onboard storage of this phone is 32GB. You can also expand it with micro SD card of 32GB. The Operation system is Android 7.1 Nougat.

Coming to the performance, The Alcatel A7 XL features an octa-core MediaTek MT6750S processor. It has a four cores that run at 1.5 GHz and another four at 1.0 GHz. The RAM is 3 GB.

One thing that draws my attention on this phone is the impressive battery capacity. This day’s people prefer more power than specs when it comes to smartphone and the Alcatel A7 XL meet the requirements.

The smartphone house 4,000mAh juicer battery that promises to last up to 8 hours of talk time. This also supports fast charging technology.
on the rear, you will find a fingerprint scanner.

Price of Alcatel A7 XL.

General features of Alcatel A7