Gionee P8M is a 5.0-inch smartphone with an impressive battery capacity, nice specs, and a budget-friendly device. 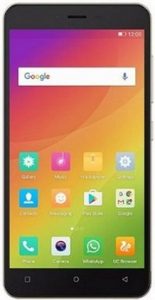 Where to buy Gionee P8M.

The Gionee P8M has 5.0 inch IPS on-cell display with a resolution of 1,280 x 720 pixel
and density of 293ppi. It will surely offer a decent image view and color.

The smartphone comes with a plastic body design and this should not be a problem considering the price at least the looks of the phone is not that bad.
Though not sleek but it will still be comfortable to hold.

Considering the budget status, you should not a expect a combo or a decent
shooter from this device.

The Gionee P8M has 5MP sensor on the rear with 2MP front facing-camera.

Gionee P8M has a quad-core MediaTek MT6580 processor with 1GB of RAM. This specs should be enough to surf the internet but obviously not to play a sensitive 3D game.

The onboard storage is 8GB. You can still expand the storage to 128GB if the need arises with micro SDcard.

It has an operating system of Android 7.0 Nougat with Amigo 4.0 skin.

The top selling point of this phone is the massive battery it has.

The 4,000mAh Li-Po battery on the hood promise to last up to 30 hours of talk time. The rated standby time should mount up to a month when guys charged.

The price of Gionee P8M in Kenya should be around 9,850 KSh.