Parading a whole 6GB of RAM under the hood, the Vernee V2 is not only here to impress you with its unique looks and color which is Black but to gives users the best and unrivaled performance. 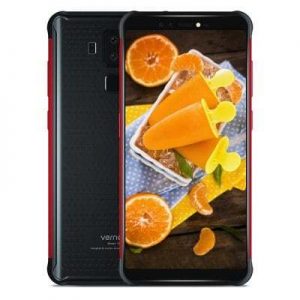 This phone is another great device coming from Vernee after Vernee M6 was released that looks almost bezel-less with other mind-blowing features to win more heart of buyers. Let’s see what this phone has to offer.

Take another glance at this phone. It looks rugged but at the same time friendly something that speaks high volumes of quality. You are right, this beast is water resistant as it packs IP68 rating.

The combination of plastic and metal is what made up this phone. No wonder it has a smooth panel where the fingerprint sensor is located. The Vernee V2 has a large display of 5.99 inches (almost 6-inch) with an IPS display and 1080 X 2160 Pixels resolution.

The dimension is 156 mm x 80 mm x 11.2 mm and thanks to the plastic feature on the panel, the phone is not that heavy as expected as it weighs only 178g. To increase its durability, the maker equipped this phone with a corning gorilla glass on the front of the screen making it scratch resistant.

The Vernee V2 has MediaTek Helio P23 MT6763V processor that carries out it heavy lifting job with the help of 8 core running at a speed of 2.0GHz and 1.5GHz respectively. The huge 6GB of RAM is here for gamers and to handle high demanding app without any hassle while the ARM Mali-G71 MP2 will process the graphics. Everything on this phone so far is amazing.

The good news does not end here. The Vernee V2 has a massive battery capacity of 5,800 mAh with a USB Type C cable, fast charging technology, and Reversible Connector. This juicer can still power another phone in form of a power bank and it supports 4G LTE data plus Wi-Fi and fingerprints sensor.