BLU Vivo One Plus Price, Specs, Features and review.

BLU Vivo One Plus is the latest upgrade of the Blu Vivo One that was launched earlier this year. This smartphone is an affordable phone that packs a large screen size and a sharp camera both on the back and front. Both the processor and specs are average. Read on to see the features, review and the price of this budget phone from Blu. 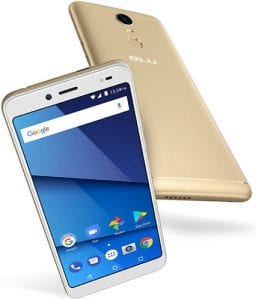 Key Features and Specs of Blu Vivo One Plus.

Where to buy Blu Vivo One Plus

The Blu Vivo One Plus still maintain the looks and design of the later variant with a screen size of 6.0 inch measuring 164.8 x 76.7 x 8.6 mm and it weighs 160 grams.
It has a resolution of 720 x 1440 pixels with 268ppi density. The body is built of metal and the screen has a 2.5D curved glass with a visible bezel and on-screen display button which users can use for navigation. You will be getting this phone in Black, Gold and Blue colors.

On the camera, the Blu Vivo One Plus has a dual camera which one is on the back and another on the front for a selfie. This camera snap with 13-Megapixels both on the back and front and they all record high videos quality and snap beautiful photos with LED flash. The inbuilt storage on this phone is 16GB and you can expand it up to 64GB using a micro SD card. 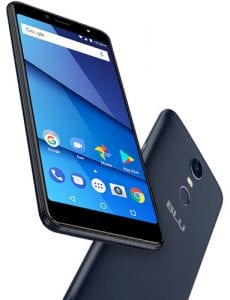 The Blu Vivo One Plus has a hardware of MediaTek MT6739 with a Quad-Core processor that clocked at 1.3GHz. It has a PowerVR GE8100 GPU for graphic and a RAM of 2GB to give users a solid performance. The inbuilt battery is 4,000 mAh with fast charging technology and its powered by Android 7.1 Nougat. Blu Vivo One Plus also has a rear-mounted fingerprint scanner, it supports 4G data connection and it has a micro USB 2.0 with Bluetooth and WiFi for wireless connection.

Price of Blu Vivo One Plus.

General features of Blu Vivo One Plus