The Nokia 4.2 is among the affordable smartphone that was launched by HMD with decent body design and impressive features. The new phone fall under mid-range device with Snapdragon 439 on the inside and also has 2GB + 16GB or 3GB + 32GB memory. There’s a dual camera set-up and it has a nonremovable battery capacity of 3,000 mAh. 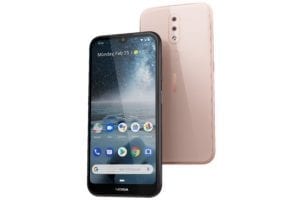 The Nokia 4.2 follows the normal Nokia body design. The phone has a smooth panel that house the dual camera and an LED flash. There’s also a fingerprint sensor for security that is sitting just below the LED flash and camera. You will get a visible chin on the front with the Nokia branded name.  The Nokia 4.2 has a screen size of 5.71-inch IPS Panel with a notch cut out at the top where the front camera is hidden.
It has a screen resolution of 720p+ and 295ppi with the trending 19:9 aspect ratio. The phone is built with glass and it has a dedicated Google assistant key which wakes up the Google Assistant upon tapping it. It weighs 161 gram with 8.4mm in thickness and it’s available in Black and Pink Sand colors.

The Nokia 4.2 has two camera set-up on the back that comprises of a 13MP shooter with an f/2.2 aperture and PDAF alongside another 2MP depth sensor camera for sensing the depth of field in portrait shots.  The camera shoots 1080p videos at 30fps. Selfies lovers will get a single front-facing camera of 8MP with f/2.0 aperture which also double as Face Unlock. 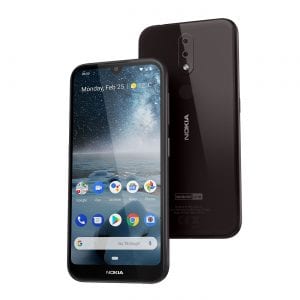 Powering the Nokia 4.2 is a Snapdragon 439 SoC with an octa-core processor clocked at 2.0GHz paired with Adreno 505 GPU.  It has 2GB or 3GB RAM with internal memory of 16GB or 32GB respectively which can be expanded using micro SD card. The phone runs on stock Android One which is based on Android 9.0 Pie operating system. The Nokia 4.2 has a nonremovable battery capacity of 3,000 mAh. The connectivity options include VoLTE, WiFi, WiFi hotspot, GPS, Radio, a 3.5mm jack, a micro USB port with support for USB On The Go.

Where To Buy Nokia 4.2: View Offer On Jumia NG

Nokia 4.2 Price in Nigeria And Availability