Motorola Moto Z3 Play is the latest in a line of a flagship smartphone that is coming from the Lenovo Motorola mobile this year. This phone is the latest with impressive features and nice body design that speak high volume of quality and premium at the same time. 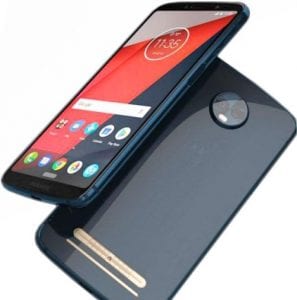 Apart from the beautiful body design, the Motorola Moto Z3 Play also packs some powerful processor on the inside with other regulars under the hood.

The Motorola Moto Z3 Play is looking classic, no doubt about it, the body is made of Aluminum on the panel while the front area features glass. The phone also comes with a body protection and it’s both dust and waterproof and you can buy the phone in Black and Gold color.

On the display, the Motorola Moto Z3 Play has a display size of 6.0-inches FHD+ with Super AMOLED capacitive touchscreen parading a sharp resolution of 2160 x 1080 Pixels and 402 pixels per inch density. The front screen is also protected by a corning gorilla glass 3 which makes it scratch resistant.

With a triple camera mounted on the phone, the Motorola Moto Z3 Play will also be offering something great to photographers. On the back, it offers a dual camera of 12 Megapixels + 8 Megapixel which features FHD video recording, autofocus, TouchFocus and a Dual-Tone LED Flash. Aside this is also a 2160p video resolution that can be recorded at 30 seconds per frame.

While the 5 Megapixels front camera for selfie also comes with an LED flash as well. On the storage, the Motorola Moto Z3 Play has an internal memory of either 32GB or 64GB and you can expand it up to 256GB using a micro SD card.

Something powerful is here, there is a Qualcomm Snapdragon 636 SDM636 SoC on the inside with a 64-bit Processor and an octa-core that runs at a speed of 1.8GHz along with 4GB/6GB of RAM and a GPU of Qualcomm Adreno 509 handling graphics.

Motorola Moto Z3 Play has an operating system of Android 8.0 Oreo with a nonremovable battery capacity of 3000mAh that supports quick charge technology. The connectivities are Bluetooth v5, 3.1, Type-C 1.0, with Reversible Connector, Magnetic Connector 4G LTE, Wi-Fi 802.11 a/b/g/n/ac, Dual-Band, Wi-Fi Hotspot and Wi-Fi Direct. The fingerprint sensor is likely to be located on the side which you can use to unlock your phone in few seconds.