Doogee X55 is an affordable smartphone that packs full-screen display of 5.5 inches, a fingerprint sensor, and 1GB RAM. This phone is a low budget device and to live up to it price tag it does not support 4G network and the hardware is not that powerful but still a better option than other smartphones in this category. 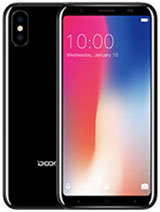 Where to buy Doogee X55.

The Doogee X55 has a smooth rounded edge featuring the combination of metal and plastic. The phone has a screen resolution of 640 x 1280 Pixels under the density of 260ppi with an IPS display technology. The Doogee X55 is available in amazing color variants like in Black, Blue, and Gold colors.

The Doogee X55 still retains the combo shooter that must Doogee products normally have. These sensors snap with 8MP + 8MP respectively giving quality shots even on a dark background making use of its LED flash. On the front is a 5MP camera for a selfie.

The main camera has HD video recording capability with other features on board such as Autofocus, Continuous shooting, Digital zoom, Exposure compensation, Face detection, Geotagging among others. For storage, the Doogee X55 has an inbuilt storage of 16GB expandable up to 64GB using microSD card.

The Doogee X55 has a MediaTek MT6580 with a Quad-Core that runs at 1.3GHz ARM Cortex-A7 and ARM Mali-400 MP2, with 2-Cores GPU. It’s powered by Android 7.0 Nougat with 1GB of RAM. This phone specs may not go well with multitasking so don’t open multiple apps at the same times. You also get a fingerprint scanner and a battery capacity of 2800mAh which promise to hold power up to 14 hours of talk time on a single charge.