Leagoo Power 5 is a flagship smartphone that was unveiled alongside the Leagoo S9 the iPhone X clone. This Leagoo Power 5 smartphone actually took the rightful position of the Leagoo S9 as it comes with more premium design and specs. This phone even supports wireless charging technology just like the iPhone X and it has a huge RAM of 6GB, massive inbuilt storage, and a gigantic battery capacity. 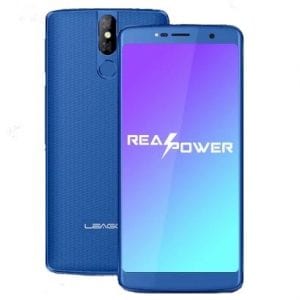 Let’s see some of the features on this Android device.
Key Features and Specs of Leagoo Power 5.

Where to buy Leagoo Power 5

This phone is built with both metal and plastic as the panel is where to Likely find the plastic while the sides have the metal and the front screen is covered with glass as well. You get a sharp resolution of 1080×2160 Pixels and 403ppi density in 5.99 inches display technology.

The dual cameras on the back are perfectly OK and sharp as it snaps with 13 Megapixels + 5 Megapixels respectively with a dual LED flash and F2.0 Aperture promising to record 1080p video at 30 seconds per frame. The single-camera on the front is 13 Megapixels with F2.0 Aperture, LED Flash and it also takes selfie even in dark light condition with an LED flash. The inbuilt storage on this phone is 64GB and it supports microSD card up to 256GB.

For the sake of an excellent performance especially when gaming, The Leagoo Power 5 decided to pack a powerful processor of MediaTek Helio P23 MT6763V with 8 core that clocked at 1.5GHz + 1.0GHz respectively. There is an impressive RAM of 6GB given support to the processor and the ARM Mali-G71 MP2 is for GPU. It has an Android version of Android 8.0 Oreo operating system with a massive battery capacity of 7000mAh with fast charging technology and it supports wireless charging. There is a fingerprint scanner, Wi-Fi, 4G, and micro USB with OTG.