Huawei Honor Play 7 is an entry-level smartphone with a full-screen display, dual camera and 2GB of RAM. It runs on the latest version of Android 8.1 Oreo and instead of a fingerprint scanner, the Huawei Honor Play 7 only support face recognition features. 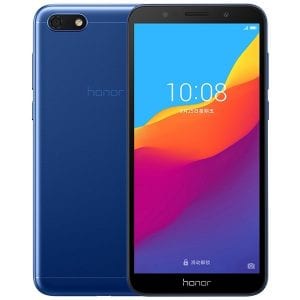 Where to buy Huawei Honor Play 7

The Huawei Honor Play 7 looks exactly like some of the series of budget smartphones released by Huawei this year example is the Huawei Honor 7s. the phone sport little bezels with a body dimension of 146.5 mm x 70.9 mm x 8.3 mm and it weighs 142 grams.

It comes with an on-screen button and it’s available in Black, Gold, and Blue colors. The display is 5.45 inches HD IPS capacitive touchscreen with 1440×720 Pixel and a resolution and a 295 pixels per inch density. The front screen is protected by a 2.5D Curved Glass while the overall design features both plastic and metal materials.

On the camera, the Huawei Honor Play 7 comes with two camera setups. The primary camera is 13 Megapixels with image dimensions of 4160 x 3120 Pixels and 1080p@30fps. It also supports autofocus, Touch focus, FHD and an LED flash. While the secondary camera has 5 Megapixels with Aperture F2.2, Face Recognition. On the storage, users will be getting an average inbuilt memory of 16GB and they can expand it up to 128GB via micro SD card.

Huawei Honor Play 7 has a MediaTek MT6739 chipset with a Quad-Core processor that runs at 1.5GHz CPU frequency along with 2GB of RAM. The phone is further equipped with Android 8.1 Oreo alongside Emotion 8.0 UI on the top and a nonremovable battery capacity of 3020mAh without fast charging support. The connectivity on the inside includes global LTE, Wi-Fi 802.11 b/g/n, Wi-Fi Hotspot, Wi-Fi Direct standard support and Micro USBv2.0 among others.