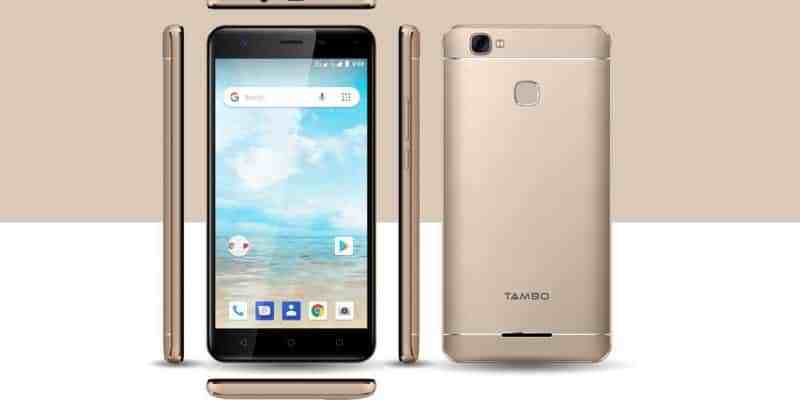 TAMBO mobile phone manufacturer has finally hit the Nigeria market with the aim of joining iTel and other phone makers in producing affordable smartphones for those with a low budget. They started rolling out fingerprint scanner with massive battery capacity phones and the first was the TAMBO TA 50 and the TAMBO TA 55 smartphone. Both feature the same design and specifications. The TAMBO TA 55 has a bigger 5.5 inches, while the TAMBO TA 50 has a standard 5.0 inches. Both features dual camera with a rear-mounted fingerprint scanner for security.

Both the TAMBO TA 50 and the TAMBO TA 55 are built with a polycarbonate material with a smooth panel that houses a fingerprint scanner, LED flash and a single camera while the speaker is found on the bottom. Both have a lookalike antenna lines strips on the bottom and top of the panel with a curved edge.
They are both available in Black and Gold colors. On the display, the TAMBO TA 50 has a standard screen size of 5.0 inches, while the TAMBO TA 55 has a screen size of 5.5 inches with the same screen resolution of 640 x 1280 Pixels with 268 pixels per inch density.

As long as the camera is concerned, they both have the same dual-camera configuration. You will get a single rear camera of 8MP with other features like an LED flash, Face beauty, panorama, burst mode, sticker and more. For selfies, you will also get the same 8MP with an LED flash as well. The internal storage is 16GB and you can still expand it with micro SD card.