The South Africa based company has launched a budget mid-range smartphone with an infinity display called Hisense Infinity F17 Pro. This should be an upgrade of the Hisense Infinity F17 smartphone. The smartphone comes in 5.45 inches IPS, LCD capacitive touchscreen with a fingerprint scanner on the back and it’s powered by Android 7.0 Nougat. Stay tuned as we inbox this device. 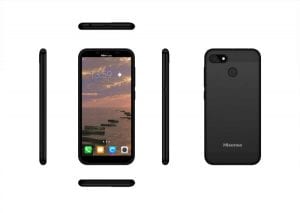 The Hisense infinity F17 pro sport a metal body design with a smooth panel that houses the camera, the LED flash, the fingerprint sensor on the normal position and then the branded logo on the bottom of the panel. Shifting to the side, the phone measures 148.6 mm x 72.5 mm x 8.7 mm in dimensions with the right side housing the volume rocker and the power button while the left side is left blank.

On the screen, the phone features on-screen button with a full-screen size of 5.45 inches HD+ and a resolution of 1440 x 720 Pixels. The front glass also features a 2.5D Curved Glass Screen and GFF Full Lamination. You will be getting this phone in Gold and Black colors.

On the camera, the Hisense infinity F17 pro sport a dual camera configuration which has the highest lens on the back for photography. The 13 Megapixels of camera support full HD video recording and it can shoot up to 1080p@30fps with F2.2 aperture and LED flash for night shooting. You will get another snapper facing the front area which is dedicated to a selfie and video calls.

Surprisingly the 5 Megapixels comes with Interpolated Resolution 8MP, F2.2 aperture, and LED Flash meaning, users will get the best selfie from this phone even in a dark background location. The Hisense infinity F17 pro has an inbuilt memory of 16GB which can be expanded up to 128GB using external memory. 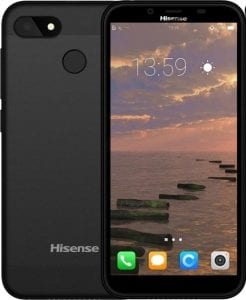 Though the performance on this phone will not be great, still you will surely get something decent enough to handle browsing and some low demanding apps as this phone is preloaded with a MediaTek MT6739 processor that clocked at Quad-Core 1.3GHz frequency with 2GB of RAM and PowerVR GE8100 GPU.

The Android 7.0 Nougat is what this phone will depend on along with a nonremovable battery capacity of 2450mAh and it also supports two SIM cards which you will surf and download heavy files with the 4G LTE network.

The Hisense infinity F17 pro will be available in South Africa and the phone is expected to cost around $100. That is about 35,000 Naira in Nigeria.

Share
Previous You Can Now Make Video Calls with Instagram [See How].
Next Coolpad Note 6 Price, Specs, features and Review.