Just as expected the Reame has finally introduced the Realme 6i which will be the affordable version of the Realme 6 smartphone. The phone comes with a similar body design with the original. It has great cameras set up with generous inbuilt storage and a massive battery on the hood. Checkout the Realme 6i full specifications and the price.

The Realme 6i has a decent body that is built with the combinations of plastic and glass. The device also parades a smooth panel housing the camera, an LED flash, and other sensors. The fingerprint scanner is placed on the side for security. The phone has a body dimension of 164.4 x 75.4 x 9 mm and weighs 194 grams.

On the front, it has a waterdrop notch that offers a large screen display size of 6.52 inches. The screen is equipped with IPS LCD technology with 720 x 1600 pixels, a 20:9 ratio, and 269 PPI density. It has display protection and reaches 82.8% screen-to-body ratio. 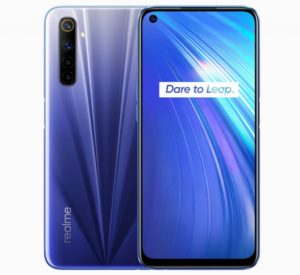 On the camera department, the smartphone offers an impressive camera setup that consists of 48 MP shooter with another 8 MP ultrawide sensor, plus 2 MP macro camera and lastly is 2 MP depth sensor The camera has some internal features that include LED flash, HDR, panorama and can shoot 2160p@30fps, 1080p@30fps, gyro-EIS video resolutions. The front camera is 8 MP featuring HDR, panorama and can record 2K video quality.

The Realme 6i has a Mediatek Helio G80 chipset that is built on 12nm process technology. The hardware has an Octa-core processor clocking at a speed of 2.0 GHz. The Mali-G52 MC2 is for graphics and gaming. The phone is powered by the latest Android 10 operating system with ColorOS 6 user interface on top.

The Realme 6i packs an inbuilt storage of 32GB with 3GB RAM and another 64GB and 4GB RAM for a smooth performance. The memory is expandable via micro SDcard. The sensors equipped on the inside are Fingerprint (rear-mounted), accelerometer, gyro, proximity, and compass.

The Realme 6i has a nonremovable battery capacity of 5000 mAh with support for fast charging using charging 18W. The dual SIMS has a 4G LTE network and other options such as Wi-Fi 802.11 a/b/g/n/ac, dual-band, Wi-Fi Direct, hotspot, Bluetooth, A-GPS, GLONASS, GALILEO, BDS, FM Radio and 2.0, Type-C 1.0 reversible connector, USB On-The-Go.

Realme 6i Price And Availability