The iTel A22 Pro is the advanced version of the iTel A22 smartphone. These phones have been officially launched in India at a starting price of Rs. 5,499. They pack an impressive design but apparently lack fingerprint scanner. 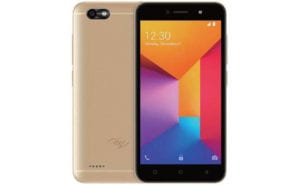 KEY FEATURES AND SPECS OF iTel A22 Pro.

The iTel A22 Pro still maintain the body design of its sibling. The phone has a plastic body design with a smooth panel that host the main camera, LED flash and the iTel branded logo. On the front, this phone has some chunks of bezels both on the top and bottom offering a standard screen size of 5.0 inches FWVGA+ (480×960 pixels) IPS display along with an 18:9 aspect ratio.

The iTel A22 Pro still has the same 5MP as a camera for photography and 2MP on the front for a selfie and video calls. Both cameras are paired with an LED flash for night shots. You will get an upgraded inbuilt memory of 16GB which is also expandable with micro SD card.

Another notable change on this pro version is the 2GB which will help the quad-core Snapdragon 210 SoC to deliver a solid performance. Unlike the iTel A22, this Pro is powered by a standard Android 8.1 Oreo operating system with the same removable battery capacity of 2400mAh which lack fast charging technology. You will get a support of 4G LTE network and other regulars.

iTel A22 Pro PRICE AND AVAILABILITY.

The iTel A22 Pro is available in India and the phone may be shipped to Nigeria and when that happens, the expected price should be 21,000 Naira to 25,000 Naira depending on your location in the country.

Where to buy iTel A22 Pro

General features of iTel A22 Pro