Oukitel WP5000 is here, a rugged smartphone that is specially designed to be toughed and hard. This is another great phone to blue-collar workers as it’s made to survived many drops. This ruggedizes Android phone is not only strong on the outside but powerful on the inside with a massive battery capacity and a large in-built storage. 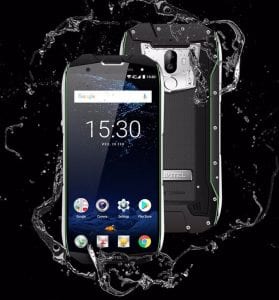 Where to buy Oukitel WP5000

The Oukitel WP5000 is not a fancy smartphone but a phone for serious minded individuals that tend to drop their phone mistakenly due to their work or the immediate environment. The Oukitel WP5000 sport a plastic and metal mix design with an 18:9 Aspect Ratio and full view under a screen size of Full HD 5.7 inches with 1440 x 720 Pixels resolution. It has a Dragon trail glass on the screen and the entire body is IP68 certified protecting it from water and dust.

The robust storage of 64GB is what you get on this phone that is extendable up to 128GB of micro SD card. The Oukitel WP5000 has a combo camera of 21 Megapixel + 5 Megapixel on the back with a Dual-LED Flash and other regulars features and it shoots 1080P, 720p at 30 seconds per frame. The front camera is 13 Megapixels with f/2.2 Aperture and it snaps a sharp selfie.

With the standard MediaTek Helio P25 processor, the Oukitel WP5000 will deliver on the performance with an 8 core and each 4 core is running at 2.5GHz and 1.6GHz respectively with large 6GB of RAM. It has Android 7.1 Nougat OS and an in-built battery capacity of 5000mAh with a quick charge to refills the battery when down. The Oukitel WP5000 has a fingerprint scanner, 4G LTE network and Micro USB 2.0 with Wi-Fi 802.11 a/b/g/n, Wi-Fi Display, Wi-Fi Direct, and Wi-Fi Hotspot.