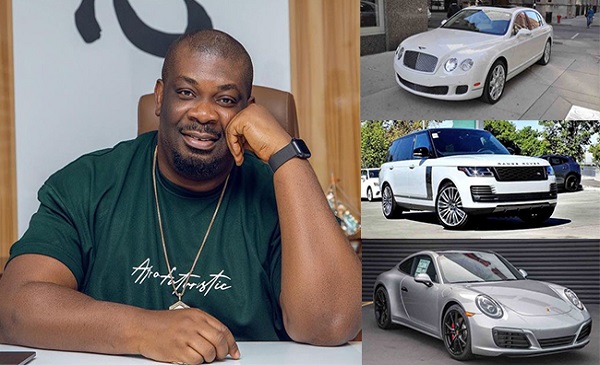 The Mavin Record boss, Don Jazzy is a name not only known to the Nigerian entertainment industry but also those from across Africa. The record producer and songwriter started his own label, Mavin Records in 2009 after leaving the Mo’Hits group he co-founded with D’banj.

He has since then worked with and produced songs for artists like Tiwa Savage (besides she was once signed under him), Dr SID, Wande Coal among others. With his huge success as a producer and businessman, Don Jazzy’s net worth has been estimated at $17.5million US dollars.

Jazzy’s goal to grow in the music industry was realized when he returned to Nigeria with D’banj. In 2004, they founded Mo’Hits Records, which was such a hit that he published two albums in two years and was working on a trio.

Don Jazzy is the stage name of Michael Collins Ajereh, a Nigerian singer who specializes in songwriting, singing, producing, and even business. Don Jazzy hails from Delta State and was born on November 26, 1982, in Umuahia, Abia State. His mother is from the Isoko tribe in Delta state, while his father is an Abia. He was raised at Ajegunle when his family relocated to Lagos.

The Mo-hits recordings catapulted his musical career into the spotlight. Don Jazzy founded Mo-Hits Records in collaboration with Oladapo Daniel Oyebanjo, popularly known as Dbanj. The Mo-hits Records label produced a few tracks that were popular in the music business.

Wande Coal, D’prince, and Dr. Sid were also members of the Mo-hits group, which is now defunct. The closure of Mo-hits marked the start of something larger, as Don Jazzy’s own record label, MAVIN RECORDS, was founded on May 7, 2012.

As a young boy growing up, music had always been an important part of Don Jazzy’s life. He played drums at various events during his high school days. He was actually a drummer before he ventured into rapping and later, producing music.

Don Jazzy’s (Michael Collins Ajereh) net worth is estimated at $17.5million US dollars, making him Nigeria’s richest musician and producer.

The Mavin boss Don Jazzy owns a lot of luxurious cars he has had over the years including a 2016 Cadillac Escalade, Bentley Continental Flying Spur, Range Rover Sports, and Porsche 911 Carrera.

The Mavin boss earns between $4million US dollars to $5 million US Dollars every year which is enough to make him one of Nigeria’s highest-paid musicians and celebrities with endorsements like Airtel and Guinness which is worth over $1 million US dollars.

He is said to own a mansion in Banana Island, the Ikoyi area of Lagos State. He also has properties in Atlanta, Georgia USA where he lives when not in Nigeria.

There are no current Don Jazzy controversies or news ongoing currently.

9 Interesting Facts About Don Jazzy Nobody Told You About

We live in an age where what people say they are is not always the same as what they really are. We’re all guilty of creating an image for ourselves via social media – deciding which parts of our personalities to show, playing up the best bits, and taming down the bad ones. A lot of times it’s easy to mistake someone’s social media persona for their real one.

However, there are some people who are exactly the same on and offline – mostly because they don’t really care what you think of them or how you perceive them to be. One of these people is a hugely talented rapper-producer, Don Jazzy.

You’d think that after spending so many years in the spotlight he’d be used to having his every move analyzed by fans and critics alike. But even today, there are several things about him that you probably don’t know.

Some of these facts will make you like him more; others might make you dislike him because they’re just plain funny. If anything, they’ll at least give you a deeper insight into the rapper’s character.

Here are 9 things about Don Jazzy that nobody has told you before.